My Juice Detox Thoughts Now That The Seven Days Are Done

I’m going to be again brutally honest.   I wasn’t exactly sure what to expect on this seven day juice detox.  I know there are no easy fixes to losing weight.  I also know being healthy is more important than anything else.  A person can be thin, but their organs might tell a different story.   Just because you look healthy doesn’t mean you are healthy.  So how really helpful is a juice detox?  Some say it is beneficial if you don’t do it longer than three days.  Others say seven days is too long especially when you are only drinking juice.  Here’s what happened to me.

The first day was easier than the end because I had just started.  I made the mistake of drinking two bottles within a short amount of time on the third day.  Therefore, I visited the bathroom more than I wanted.  Otherwise than this, I only used the bathroom for the normal activities one goes through.  I needed some reassurance to keep going on the fourth day as my stomach grumbled a little more and my mouth was getting drier.  I kept going back to the reason for doing it in the first place, which kept me going.

The primary reason I did this was to jump start my eating habits.  While I eat pretty well during the day, I like to snack at night.  It’s my biggest weakness when it comes to eating.  The other thing I tend to do is eat things that aren’t exactly the best for me.  I’m not too much into cookies or chocolate, but noticed I’ve been eating these more and it needed to stop.  I was also eating other foods highly ineffective when you’re trying to lose weight.  One’s diet is just as important as the quantity and quality of exercising.  It won’t be effective if what you eat is garbage, insert fried food.

I was in the best shape when I was exercising two hours a day, incorporating a lot of running uphill and weight lifting.  This was way back when, but times have changed even though I’ve been trying forever to get to that point again. I wasn’t in the best mind frame back then and worked out partly for the wrong reasons.  Yet, the physical results were what I wanted.  I lost 20 pounds in a five weeks.  What I wouldn’t give to lose those 20 pounds again.  It won’t happen unless I’m willing to make some major changes to my overall diet not just for a week but for the rest of my life.  This detox was a way for me to get back on track as I’m one of the millions of people who have trouble eating healthy 90% of the time and exercising regularly.  If I don’t make major changes, neither will my body.  Here’s to cutting out as much sugar, salt, and fried foods.

This juice detox offered six juices a day.  The max I could do was five on one day and only drank four the rest of the days.  I found it more difficult to drink the flavors except the one with carrots and beets especially on my last day, which was today.  I broke down and ate additional vegetables starting the third day after work.  I ate a few organic carrots, but mainly organic small bell peppers and Persian cucumbers.  I was going to wait on Friday to eat something, but I couldn’t wait any longer.  I ate the soup I’ve been waiting to slurp up since Monday.   The next few days I’m going to gradually work my way from liquids to solids.

I was able to get through this detox because it offered more than the Master Cleanse.  This was one of the mistakes I made five years ago.  I lasted basically 5.5 days until I called it quits. I would never do it again, not even if someone paid me one million dollars.  It was that bad.  The ring of fire they described was more like a quadruple ring of fire.   RAW Generation actually gave me substance in their bottles.  If I were to do this again, which I might, I would only do the three day detox.

This whole experience made me realize that yes, you are what you eat, but there’s never not a time to improve what you are putting or not putting into your mouth.  I’m not looking to be a clean, healthy eater 100% of the time, because it doesn’t exist.  Even the ones who say they are healthy 365 days have weaknesses.  While I will stumble and eat something not good for my body in the future, I’m hoping this detox further awakens the realization that just because dark holes exist doesn’t mean you have to stay there.

The order of my least favorite to best have changed.  The beet is #1 (red bottle), the orange is #2 (orange bottle), the cucumber is #3 (light green bottle), and while I could taste more difference at the beginning, the rest of the green bottles tasted the same by the end of my detox.  And there you have it, my take on my seven day juice cleanse. 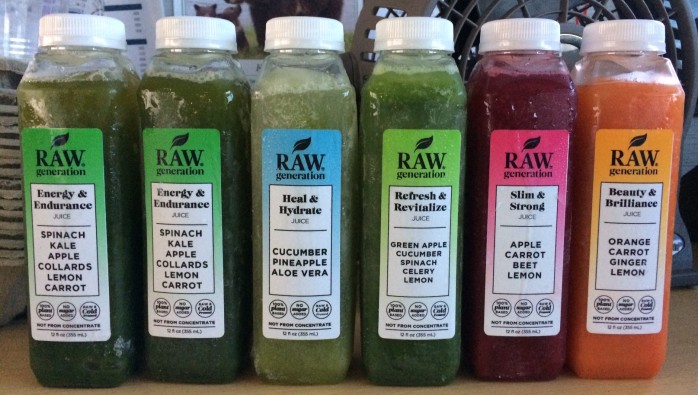